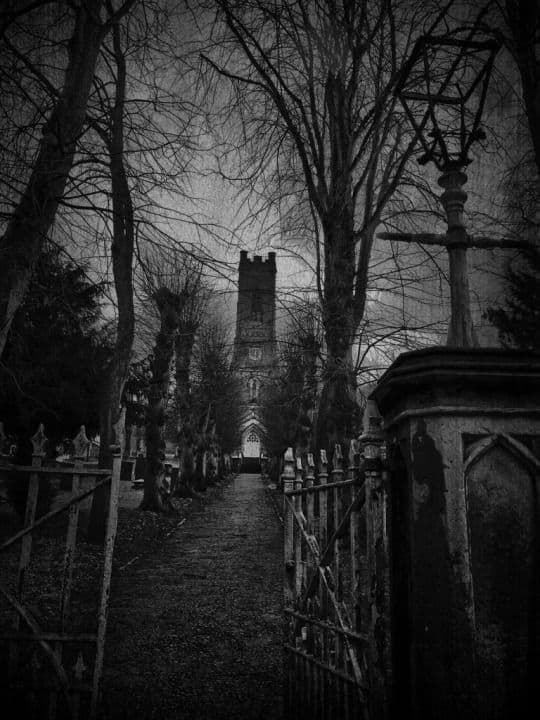 It was Friday 13th of 1854. Emmeline Wood, a 14-year-old girl was reading ghosts stories at 5am in the morning on her bed. She looked at the watch on her bedside table and got up immediately. She had to start her way to school. -Bye!- she said after closing the door.

Emmeline is a pretty girl, with long blonde hair and blue sparkling eyes. She is clever and introvert. She hasn’t got any friends, people at school think Emmeline is weird. In fact, she is. She spends most of the time writing horror stories or reading them. In spite her social problems, she was very excited that day. She set up a club of students who will meet in the cemetery every Friday at midnight to read ghosts stories. Emmeline wanted to read her stories and see if they were really scary. And maybe, she hoped, she could make some friends.

The Midnight club was formed by four boys and girls including Emmeline. They were all 14. The students accepted because they had placed a bet. The person who attended more sessions in the cemetery with ‘The mad Emmeline’ would win 30 pounds.

At 12.10 o’clock almost everybody was gathered in the cemetery. Emmeline brought some candles so they could read in the thick darkness of the night.
-Where is Josie?- asked Emmeline.
-Maybe she rethought coming. What a chicken.- mocked a girl called Amanda.
The group decided to look for Josie. After a few minutes, they heard a scream. It was Jacob. He distinguished a trail of blood in the dark. This lead him to the body of poor Josie. She had a hideous expression on her face that showed she probably had seen something terrifying after her despicable killing. There was still some gore dripping from her neck, that seemed to have been cut by a sharp, malicious scrape.

The rest of the group started to scream and run away, but Emmeline didn’t move. She was paralysed. When she was finally about to leave, she saw a note next to the body. There was a message written on a piece of paper: ‘The first victim is off. Fear, my children’. Who could have done this?- wondered Emmeline.

She was so worried and confused she couldn’t sleep all night. Meanwhile, the same questions stroke Emmeline: Who did it? And why? Something cold was grazing Emmeline’s cheek. She woke up. She was laying on the corridor floor, and she had a headache. Emmeline had constant memory loss, so maybe she woke up at night and didn’t remember it. On the way to her bedroom, she turned away and it seemed to see blood on the floor.

The sheriff Rogers knocked the door of the Wood’s house. He had to insist, because Mr and Mrs Wood were working and Emmeline wasn’t feeling well. She opened the door. She had dark bags under her eyes.
-Hello Emmeline, can I ask you a few questions? -asked the modest sheriff- Oh, by the way, this is my assistant, agent Davies. -said pointing a tall man next to him. Sheriff Rogers interrogated Emmeline about Josie and the Midnight club. They found her body in the cemetery. During the interrogation Emmeline felt so dizzy and scared. Every time the
sheriff or his helper asked her a question lots of images of blood started coming up to her memory. When it finally finished, Emmeline decided it was time to investigate by herself, so she went straight to the cemetery at 12 o’clock, when the darkness of the night prevented Emmeline of being seen.

Once on the cemetery, she started hearing voices. -I’ll kill them all. This spooky whisper went across Emmeline and finished with a tremble. She was sick. Then, a silhouette issued from the tombstones.
-Emmeline?- A childish voice asked.
-Jacob! What are you doing here?
-Investigate. I want to catch the murderer.
-I’ll kill you too.- The trembling voice came up again to Emmeline’s head.
-Didn’t you hear that?- asked Emmeline.
The unrelenting whisper drove Emmeline insane, but it all ended at once. It was time for Jacob to worry about his life. Emmeline approached Jacob slowly with a maniacal smile on her face until there was only a tiny distance between she and he.

-E-emmeline?-This were the last words poor Jacob could say. The boy had a quick but malevolent death. His neck snapped with a tombstone after Emmeline’s cruel push. She took the useless knife the boy had in his belt. She took her notebook off her bag and crossed out the name of Jacob Twist.
-Just one left.

Amanda Evans was sleeping placidly when the sound of a broken window woke her up.
-Hello Amanda. Do you know why am I here?
-Wood, go out of here or…- said almost in tears.
-Or what, Amanda?
She showed her a large shiny knife and Amanda started to shriek. However, Emmeline seemed to have a really good time.
-Don’t you know it Amanda? Don’t you remember it? You and your stupid friends set me on fire! I almost died!
-It was just a prank, Emmeline. It was Josie’s idea! It happened two years ago. And we didn’t want to hurt you.
-You did, Amanda. That’s why I set up the Midnight club. To finish with you all at once! -she approached Amanda- That day, you woke up something inside me. Another me. A second Emmeline who wants to finish with you like I did with the others!
-No, please!
-Bye Amanda Evans.
The blade of the knife pierced Amanda’s body in less than a second after saying these words. A blood stream shot out in consequence of the haemorrhage. Then, she took her notebook an left a message on the floor: The Midnight Club has ended.

Emmeline woke up at 10 am in the morning. She was faint. She remembered having a bloody nightmare. But then she looked at her hands closely. And her clothes. It was all stained of blood. And then she saw a paper with all the names of the Midnight Club members crossed off. She
screamed. She didn’t know what to do. Did she really do that? She was so afraid and confused. Then she looked at a knife next to her. She didn’t think twice.

Sheriff Rogers entered to the Woods’ house at 10:46 am. He found Emmeline’s body on her bedroom. He was going to bring her to an asylum. The doctor Davies diagnosed Emmeline the Multiple personality disorder one day after going to the interrogation with the sheriff. It is a mental disorder which causes two distinct personality states caused by a traumatic experience. But it was too late to save Emmeline. Poor Emmeline ended her life after discovering she had a second psychopath personality.